Among geology classes and rockhounds, this site is without doubt the most popular outcrop in Wake County.  Visitors mainly come to collect garnets, but there is more to see.

The Crabtree terrane includes a variety of metamorphic rocks – schist and gneiss - that were originally sedimentary or igneous rocks.  An igneous example is the Crabtree Creek orthogneiss, which is thought to have originated as a granitic pluton and is quarried at the Hanson Aggregates quarry on Duraleigh Road.  The Raleigh graphite schist is a sedimentary example.  Still other rocks of the terrane may have originated from volcanic activity.  Geologists believe that the schist here (Figure 1) was originally a sedimentary rock type such as siltstone or mudstone. 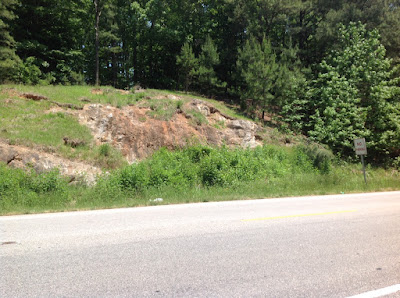 The Horse Creek schist, named for a nearby creek where other good examples are found, contains good examples of two key metamorphic minerals, garnet and kyanite.  In addition, the rock has two types of mica, muscovite (white mica) and biotite (black mica), as well as quartz and feldspar, and some other minor minerals.  Both the garnet and the kyanite are resistant to weathering and erosion.  As a result, when the host schist breaks down, these minerals tend to accumulate and are left behind.  Examine the rock (Figure 2) and see if you can identify garnet (roundish, dark red to black crystals, from BB size to one cm) and kyanite (flat, thin, bladed roughly rectangular crystals that here are mostly white to gray in color).  Then examine the soil around the outcrop; it is much easier to spot these minerals there, where they have accumulated (Figure 3). 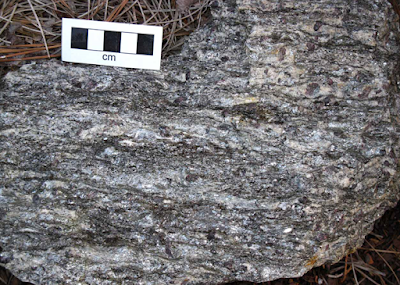 Figure 2.  Specimen of schist from the road cut in Figure 1.  Garnet crystals are obvious, but can you spot the kyanite? 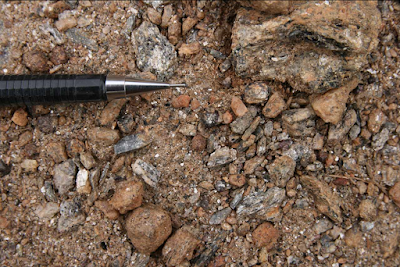 During metamorphism, rocks are modified as a result of being subjected to a new pressure and temperature, as well as forces that may squeeze or shear them.  Perhaps the most significant change is the growth of new minerals, at the expense of the original ones.  In metamorphic rocks, index minerals give an idea of the metamorphic grade.  Low-grade metamorphic rocks have been modified less than high-grade rocks.  Geologists use the combination of minerals (mineral assemblage) in a metamorphic rock, as well as the chemical compositions of those minerals, to estimate the pressure and temperature conditions of the rock’s origin.  Analysis of the rocks at this site gave estimates of about 650 degrees C (1200 degrees F) and 0.8-1.0 gigapascals (8,000 to 10,000 atmospheres) of pressure.

The conditions at which these rocks formed can be achieved at depths in the earth of perhaps 20-25 km, most likely within the deep roots of a mountain belt created by an enormous plate collision.  Today such conditions would exist deep beneath the Himalaya Mountains, which are the result of the (continuing) collision of India with Asia.  300 million years ago, a similar situation resulted when the Appalachian Mountains were raised by a collision between Laurentia (proto-North America) and Gondwana (proto-Africa).  This collision also created the supercontinent Pangea; 100 million years later Pangea split apart, giving birth to the Atlantic Ocean.  Studies of metamorphic rocks, and of geologic structures such as faults and folds, help geologists to infer such complex tectonic histories.

Posted by Skip Stoddard at 9:29 AM