This geologic map shows the pattern made by layered rock units in the vicinity of Shelley Lake.  Each color represents a different rock unit.  Notice the crude symmetry of repeated rock units on either side of the Raleigh antiform.  The antiform is an arch-shaped fold that runs north and south through west Raleigh; its hinge-line lies along the heavy black line, and the short arrows pointing out identify it as an antiform.  Rock layers along the hinge-line should be nearly horizontal, while to each side the layers dip away from the hinge; in this case, they dip very steeply.  The Raleigh antiform is highlighted by the repetition of a unique graphite schist unit shown in dark gray.  Old graphite mines resulted in the name Mine Creek (now dammed to create Shelley Lake) and Lead Mine Road (graphite is pencil lead). 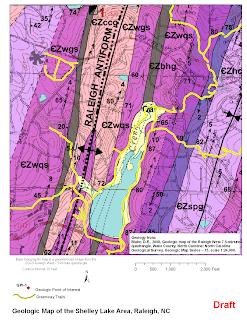 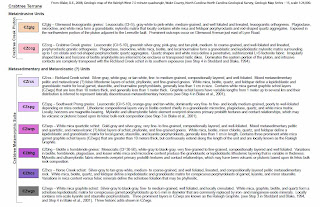 
At the east end of the Shelley Lake Dam, if the grass is not too high, in the field below you may be able to see bare patches in the soil that line up in a generally north-south direction (Photo). 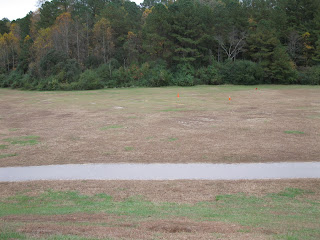 These are actually the upturned edges of steeply dipping layers of rock.  The direction of these lines is called the strike of the rock layers.  In this case, the strike is N18°E, or 18 degrees east of north.

If you continue counterclockwise around the lake, you will soon encounter a large rock on the right side of the trail embedded in a steep bank.  This is felsic (light-colored, granitic) gneiss and is a block that was moved during trail construction.  You may notice a small cross-cutting lighter colored pegmatite dike in the rock.

About 100 yards ahead, you cross a small creek on a long bridge.  To your right, there is a small rock exposure in the creek, which may be visible in the winter (Photo).  The rock foliation strikes N15°E and dips to the east at about 75o. 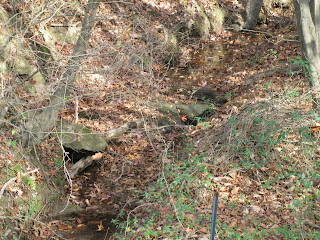 At the northern end of the lake, there is a large low-lying area that is underlain by sediment deposited by Mine Creek, which enters the lake from the north and deposits silt and sand.  This sediment constitutes a delta.  After crossing the bridge over Mine Creek and heading south, you can see a curve or meander in the creek.  On the outside of the curve, the creek runs faster and erodes the bank.  Note that large rocks, called rip-rap, have been placed here to combat erosion (Photo). 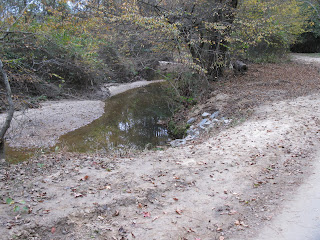 Also along this low stretch, you may notice that abundant sand and silt accumulates after heavy rains and flooding.  The city has to remove these deposits periodically.

This unpaved trail connects to the Shelley Lake loop trail at a point downhill from the Sertoma Arts Center parking area.  It runs northward through the Lake Park Swim Club and ends at Rushingbrook Drive in the Lake Park subdivision.  The trail follows a tributary creek to the west, then crosses over it on a bridge.  At the bridge you can see cascades in the creek, where the water flows over thin layers of gneiss that dip toward the west at a moderate angle, about 35o (Photo). 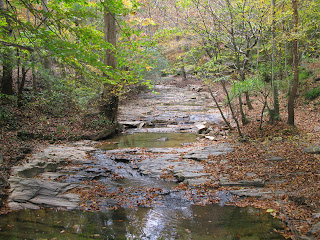 Here you are on the western limb of the Raleigh antiform; the eastern limb is on the east side of Shelley Lake, and there the layers dip more steeply to the east or even vertically, such as the layers you can vaguely see from the east end of the dam described and pictured above.  The Raleigh antiform is an asymmetric fold, with a steeper east limb than west limb.

As you proceed uphill along the trail, you come to a spot where the creek bed is underlain by light-colored Crabtree Creek gneiss.  If you leave the trail you can see small waterfalls and cascades formed by this hard rock type (Photo).  Here the layers dip gently or moderately toward the west (Photos). 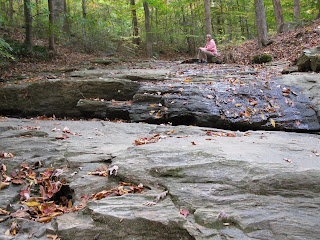 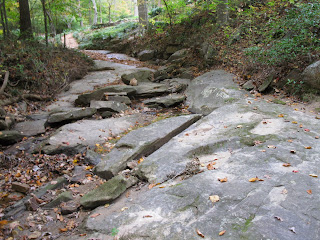 The rock is also strongly lineated, attesting to the squeezing forces that bent and stretched the rocks.

Continue along the trail, and soon cross a footbridge and arrive at the volleyball court of the Lake Park Swim Club.  If you walk a few steps to your left, you can see a spectacular cut bank exposure of soft, black graphite schist (Photo). 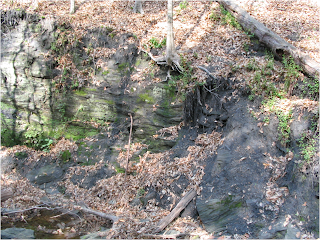 This rock is the source of the name Lead Mine Road, as this layer of graphite schist runs generally along that present-day road, and was the site of several graphite (carbon, not lead) mines.  Look carefully at this exposure and you will see that on the left (east) side, the graphite schist is in contact with light-colored, non-graphitic rock (Photo). 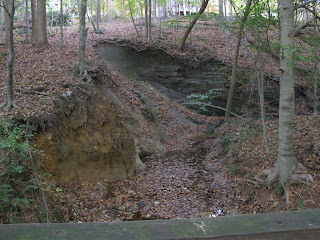 These layers dip moderately toward the west, indicating that we are still on the western limb of the Raleigh antiform.

Continue on the trail, cross another footbridge, and you will see a nice waterfall exposure of graphite schist dipping toward the west (Photo). 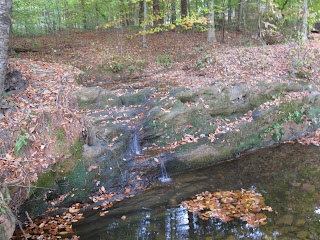