Some of the other greenway trails, such as the Crabtree Creek and Walnut Creek Trails, run east-west, and thus cut across the trend, or strike, of the rock units in the area.  In contrast, the House Creek Trail runs generally parallel to strike, passing through schist and gneiss of the Crabtree terrane.  These metamorphic rocks are thought to have originated as explosive volcanic layers and muddy sedimentary layers.  Perhaps the most distinctive rock type in this terrane is graphite schist, a soft black metamorphic rock that occurs in several thin layers, and was once mined for the graphite.  The graphite mines are the source of the name Lead Mine Road - it was pencil lead, not the metal lead.  Construction activity along Blue Ridge Road in 2011-2013 exposed abundant graphite schist, but it is has since been covered. 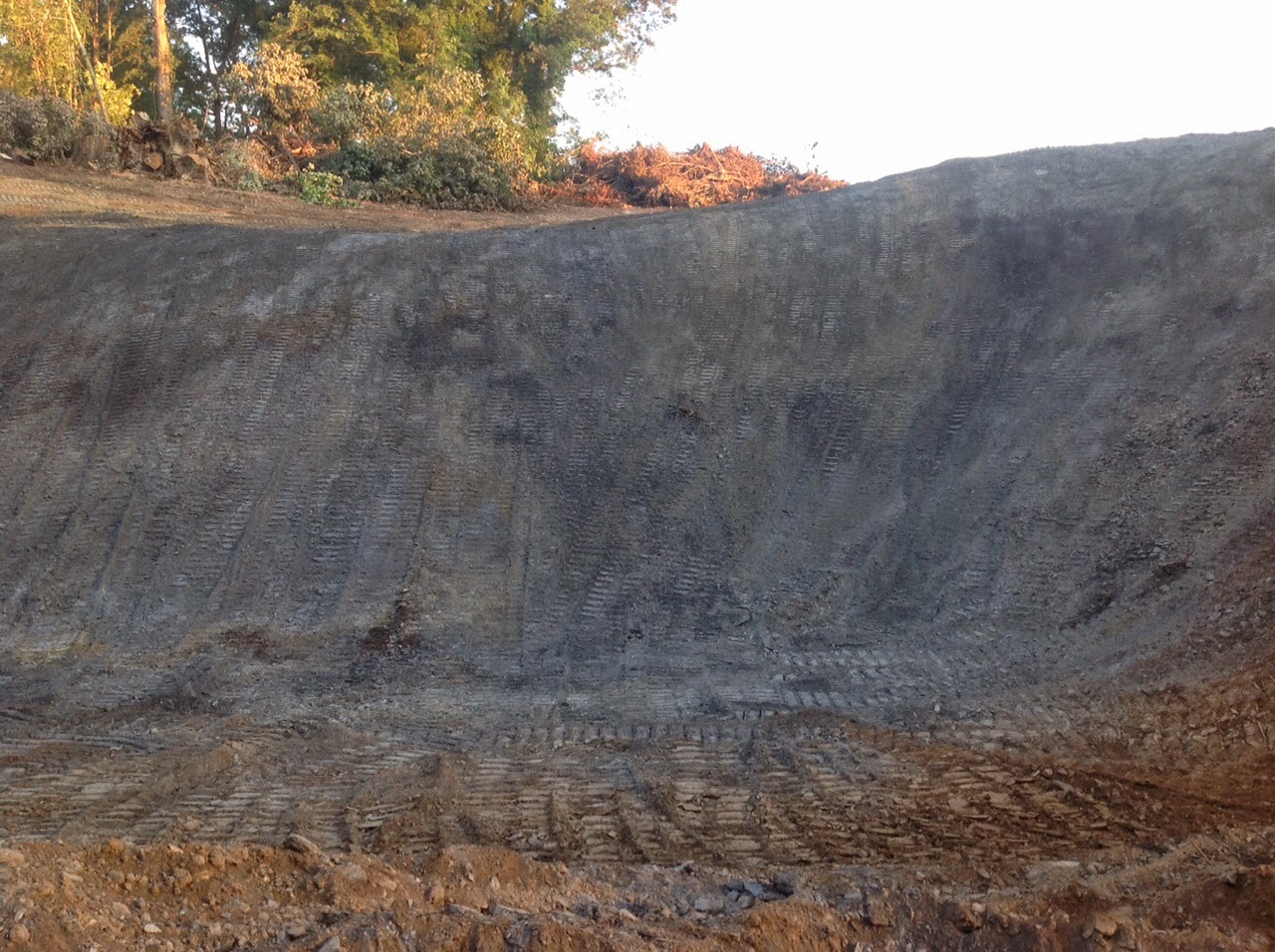 At its north end at Blue Ridge Road, the trail passes through Marshall Memorial Park, featuring a monument to a local World War II hero.  At the memorial, there are several huge blocks of a very interesting variety of banded gneiss, containing the minerals hornblende, biotite, and garnet, as well as feldspars.  There are also some zones of granite in some of these rocks. Unfortunately, these rocks are not locally derived; they are probably from the Blue Ridge Mountains.  (If anyone reading this has information, please send a comment!)

As you continue along the trail, passing behind the new condominiums, you may see sparse exposure of weathered, light-colored schist in the creek.  Continue up the hill and you soon will see tennis courts, picnic shelters, and playground of Glen Eden Pilot Park.  The trail continues along the Glen Eden Drive overpass across the Beltline, then does a U-turn and passes through a tunnel beneath Glen Eden.  The stretch from here to Lake Boone Trail passes through thick woods.  As you go south, you have noisy traffic of the Beltline on your right and bucolic House Creek on your left.  There is not much geology to see for most of the year.  In late fall and winter, you may get a glimpse of some very beautiful stretches of the creek, with some locally excellent rock outcrops.

Two layers of the graphite schist run roughly parallel to Ridge Road, off to your left.  On the geological map figure below, you may be able to see that the thickest of these layers runs through the neighborhoods between the creek and Ridge Road.  The locations of two former mines are shown along this layer, between Glen Eden Drive and Lake Boone Trail. 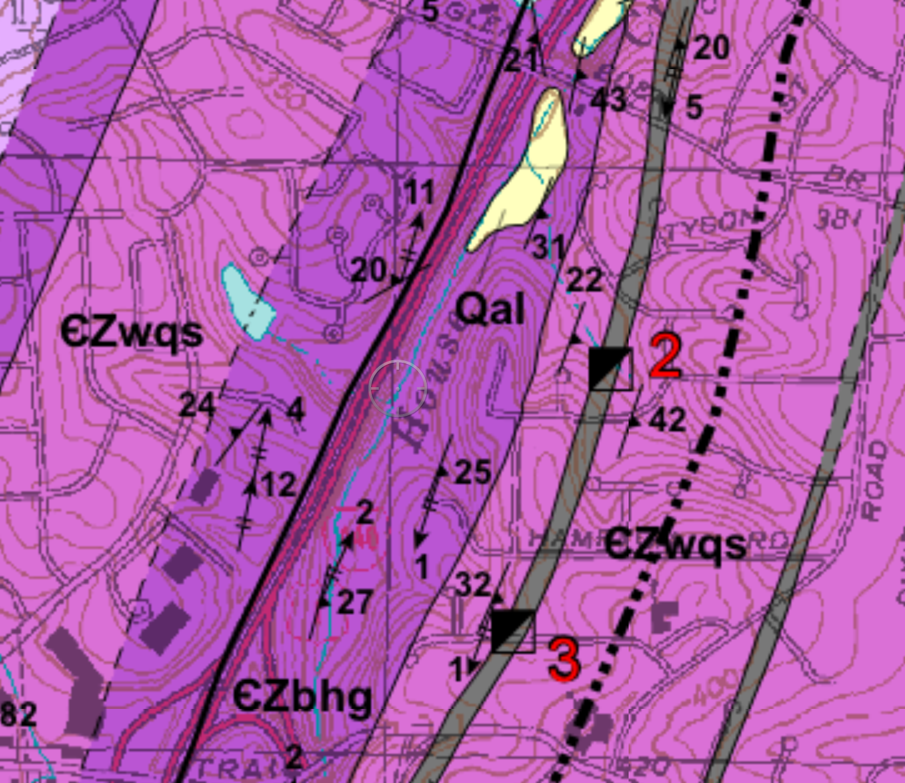 In the early 1990's, a homeowner "rediscovered" one of these mines while digging in his back yard! 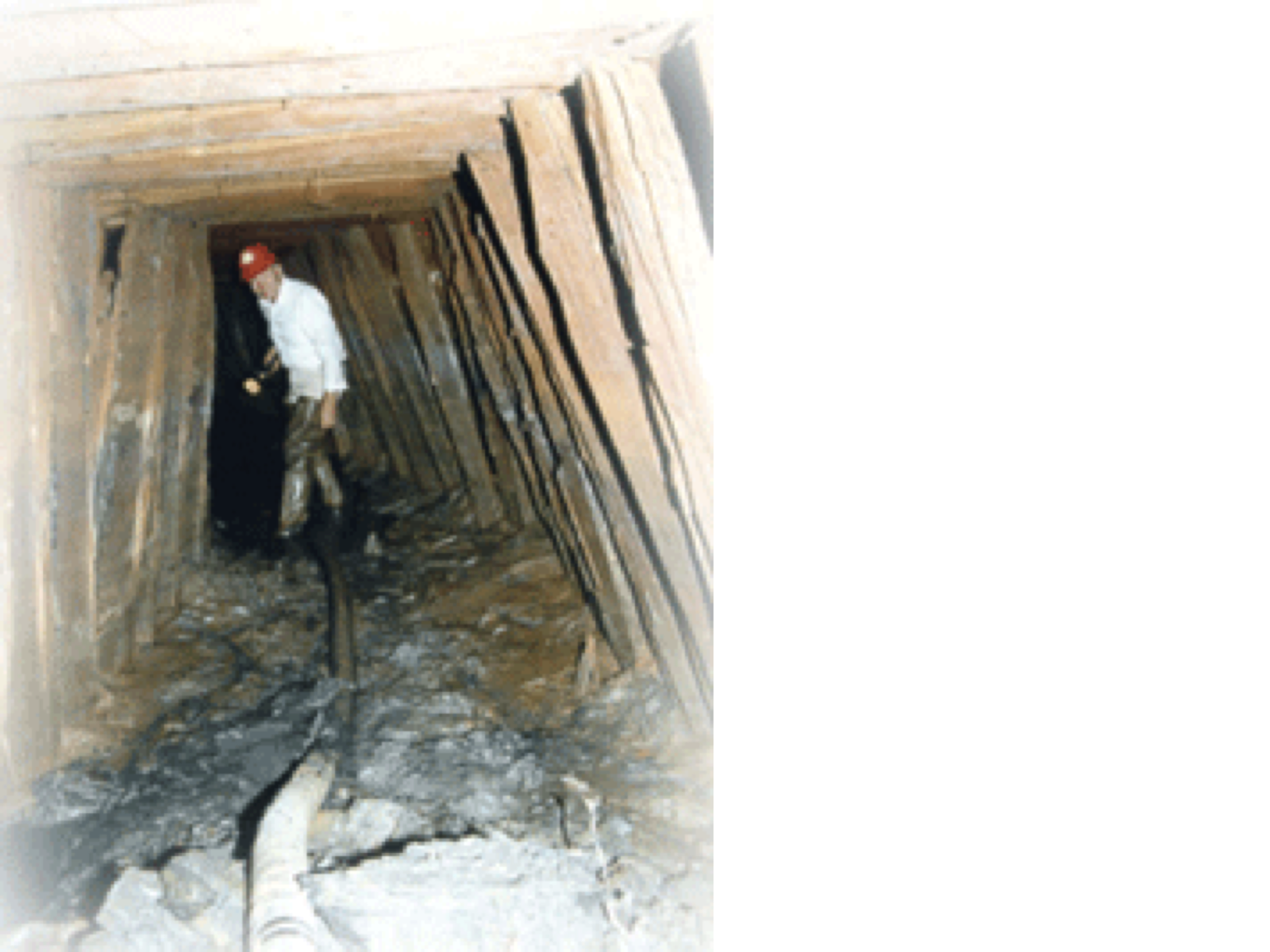 Exploring a 150-year-old graphite mine in Raleigh

The graphite layers continue south, running through the campus of Meredith College, under the Method Road greenhouses of NCSU, across Kaplan Drive, Avent Ferry Road, and the Walnut Creek Trail just downstream from Lake Dam Road.

Continue south and through the tunnel beneath Lake Boone Trail.  During construction of this portion of the trail, nearly horizontal layers of rock were exposed where the large retaining wall now stands.  If you continue just a bit further, to where the trail goes downhill and bends to the right, you can see a natural ledge outcrop of schist in a small creek on the left side of the trail.  If you take a minute to examine this exposure, you will see that the schist layers are nearly horizontal, or very gently dipping.  This is different from most of the metamorphic rocks in the Raleigh area, which dip steeply, even vertical in some cases.  The reason for the shallow dip here is that this location is right along the hinge-line of a large fold, the Raleigh antiform.  The antiform is basically a huge arch of rock layers, and we are right at the top of the arch here.  This antiform can also be studied at Shelley Lake. 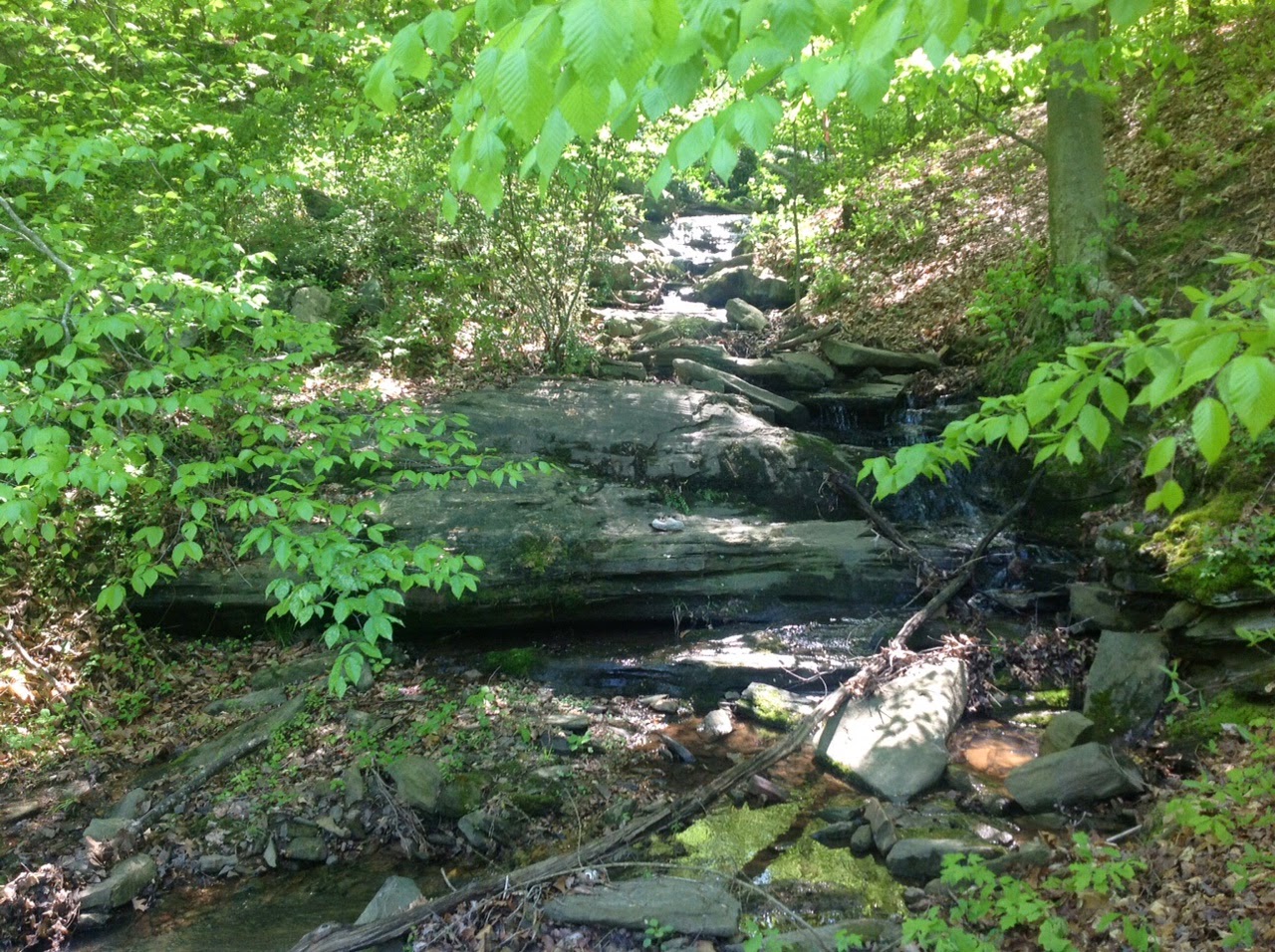 Continue just a short distance ahead and you may see some large outcrops of light-colored gneiss in House Creek below you to the right.  These were probably volcanic in origin. 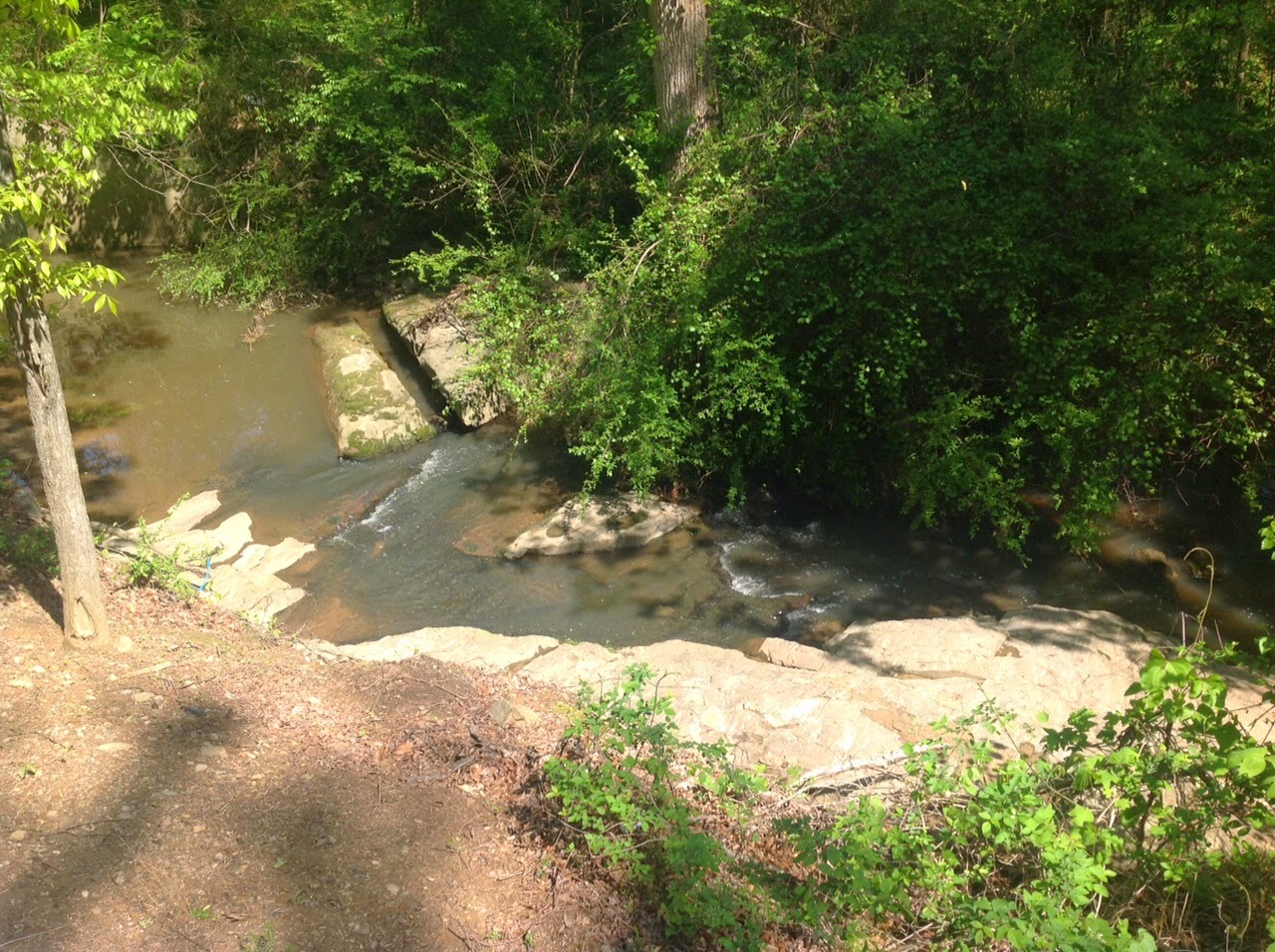 From this point, continue south along the trail, up one of the steepest hills in the greenway system, and at the top you connect with the Reedy Creek Trail.

If you turn left and take the Reedy Creek Trail, you can connect with the Rocky Branch Trail, and eventually the Walnut Creek Trail, and continue all the way to the Neuse River Trail if you so desire.