Site Access:  Heading south on Highway NC 96, there is a space to pull off the road on the right.  Park here and follow the path by the big blocks of rock.  You will see an extensive exposure of granite.  From this exposure, follow the trail from the back corner, near more blocks, and you will come to an even larger expanse of granite.  This site is Mitchell's Mill State Natural Area, part of the NC State Parks system.

The rock itself
Granite is composed of two types of feldspar – orthoclase and Na-plagioclase, plus quartz and biotite mica. Sometimes it may contain hornblende or muscovite mica or garnet. It always also contains some tiny minerals in small amounts. Granite is the most common type of rock that is quarried for crushed stone, used in making concrete and asphalt, among other things.  The granite here is a medium-grained biotite granite.

You may notice certain features in the granite at Mitchell’s Millpond (Figure 2).  Cracks or fractures in the granite are of two types.  Exfoliation fractures are parallel to the earth’s surface; they form as the result of slow erosion that removes the weight of the overlying rock.  Joints are sets of parallel, generally steeply dipping cracks that are related to horizontal stresses.  Below the surface, groundwater moves along these cracks.  You may also see thin bands of slightly different rock cutting across the granite (Figure 3).  These may be quartz veins, consisting of only gray, glassy quartz, or they may be aplite (fine-grained white granite) or pegmatite (coarse-grained granite).  In addition, you may see biotite schlieren, which are dark patches of biotite mica that formed during intrusion and crystallization of the magma (Figure 4).

Origin
The granite magmas that intruded this region during the late Paleozoic were generated in the lower crust of the earth, and moved upward until they stopped, cooled, and crystallized. The magmas formed as a result of the tremendous collision between continental plates that raised the Appalachian Mountains. Many of these magmas ascended along fault zones that were active at that time, such as the Nutbush Creek fault that runs through central Wake County. There is no evidence that any of these granitic magmas reached the surface – if they had, we would expect to see some remnants of volcanic rock of the same composition and age.
You may notice certain features in the granite at Mitchell’s Millpond (Figure 2).  Cracks or fractures in the granite are of two types.  Exfoliation fractures are parallel to the earth’s surface; they form as the result of slow erosion that removes the weight of the overlying rock.  Joints are sets of parallel, generally steeply dipping cracks that are related to horizontal stresses.  Below the ground surface, groundwater moves along joints; if there are numerous joints and they intersect, then wells can produce ample water.  In eastern Wake County, a majority of homeowners rely on wells drilled into the granite.  You may also see thin bands of slightly different rock cutting across the granite (Figure 3).  These may be quartz veins, consisting of only gray, glassy quartz, or they may be aplite (fine-grained white granite) or pegmatite (coarse-grained granite).  In addition, you may see biotite schlieren, which are dark patches of biotite mica that formed during intrusion and crystallization of the magma (Figure 4).

This 93-acre site is a Registered Heritage Area.  It contains some of the best examples of native plant communities that grow in such a “granitic flatrock” environment.  You can see that erosion by running water proceeds very slowly, due to the resistance of this hard rock.  Note the numerous potholes (Figure 5).  You may notice that some of them line up along a fracture in the granite.  These potholes form over time as the result of small pebbles that get caught along a crack, and then drill away at the bedrock when the stream water is high and fast. 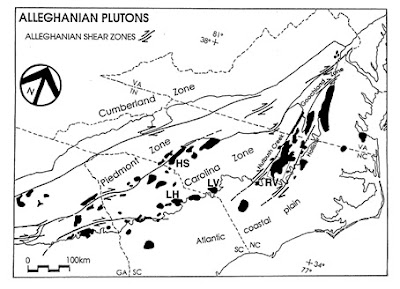 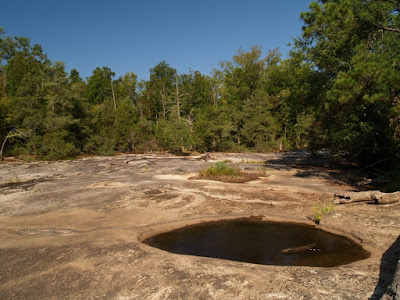 Figure 3.  Dikes and veins cutting through the granite. 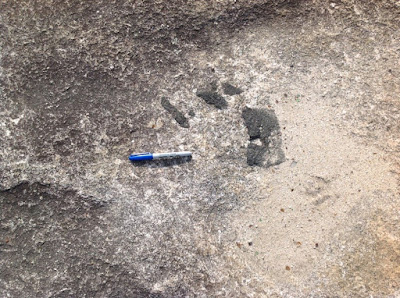 Figure 4.  Biotite schlieren in the granite. 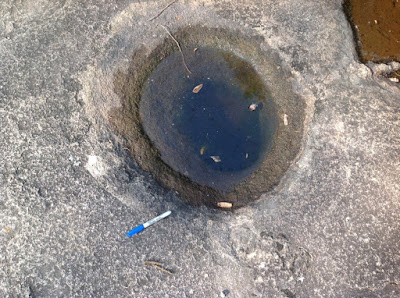 Figure 5.  Pothole at Mitchell’s Millpond.  In the bottom of this hole, you would find rounded pebbles that act as a “drill bit” when they are swirled by fast-moving water.

Geologic terrane, element, or event:  Opening of the Atlantic Ocean

Site Access:  This is an embankment next to an electrical substation.  Exercise caution, avoid the fenced-in enclosure and do not block access.

Introduction
Here, a ridge was partially excavated to make room for the substation.  The excavation exposed part of a large diabase dike.

Diabase dikes
A dike is a sheet-like body of igneous rock intruded as molten magma that cuts across the older rocks.  In Wake County and surrounding areas, most diabase dikes are sheets that dip very steeply and trend close to north-south (Figure 1).  Diabase is a dark-colored igneous rock that is a variety of basalt, the rock type that makes up all the ocean floors of the earth.  Whereas basalt is volcanic, diabase is intrusive, meaning that the molten magma cooled below the earth's surface.  The age of the diabase in our region has been determined quite precisely; it is almost exactly 200 Ma (million years old).  In fact, our diabase was formed in response to the stretching and eventual breakup of the supercontinent Pangea, and the opening of the Atlantic Ocean.  Its age helps to date that event.  The dike exposed here runs through downtown Garner, roughly along Creech Road, passing along the west edge of Southeast Raleigh High School, and through Southgate Park.  It continues north at least as far as Millbrook Road. 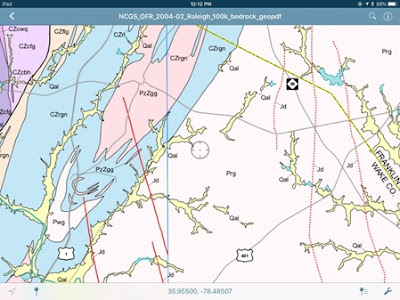 Spheroidal weathering
Weathering is the gradual breakdown of hard rock at or very near the earth’s surface.  Chemical weathering transforms hard minerals like feldspar and hornblende into soft clay and iron oxide; it is key to the formation of soil.  At this site, the chemical process known as spheroidal weathering is displayed in spectacular fashion.  Imagine a body of rock, beneath the ground, that has a network of parallel horizontal and vertical cracks, intersecting at right angles (like a Rubik's Cube).  The cracks break the rock into many cubes or rectangular blocks.  Groundwater seeps into the cracks and the rock begins slowly to chemically decompose.  The process attacks the corners of the "blocks" most intensely because there are three rock surfaces in contact with the water.  Over time, this chemical weathering modifies these cubic blocks into rounded spheroids.  The “Rubik’s Cube” becomes a bunch of hard rounded rocks separated by soft decomposed material.  Erosion then can remove the soft material and only the rounded rocks remain (Figures 2 and 3).  Spheroidal weathering typically occurs in igneous rocks, including diabase, granite, and gabbro. 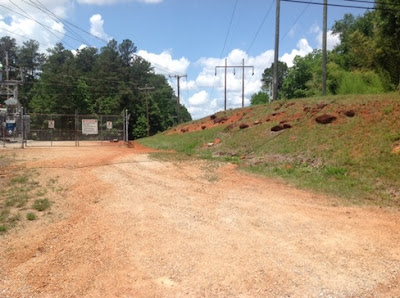 Figure 2.  Approach to the site, showing the electrical substation (left) and the embankment with diabase spheroids (right). 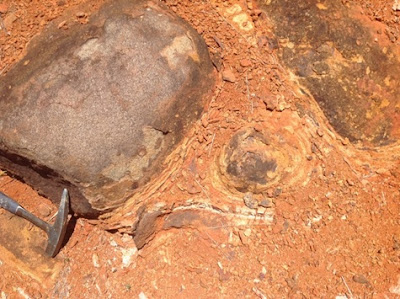 Site Access: This is an active railroad line!  Great care must be taken while visiting!  Note:  This railroad interchange has been re-configured so that the rail line runs on an overpass above the highway.  Now, the sedimentary rocks are only visible on the west side of the tracks.  The exposure on the east side of the tracks, part of which is shown in Figure 4, is now completely covered by granitic rip-rap.

The rocks exposed in the railroad cut help tell part of the geologic story of North Carolina.

When the Supercontinent Pangea (Figure 1) began to split apart approximately 245 million years ago, a system of rift basins (similar to the modern day East African Rift system) were formed all along the east coast of North America (Figure 2).  Called the Newark Rift System, the splitting apart of Pangea formed the Atlantic Ocean and several inland fault bounded rift valleys. 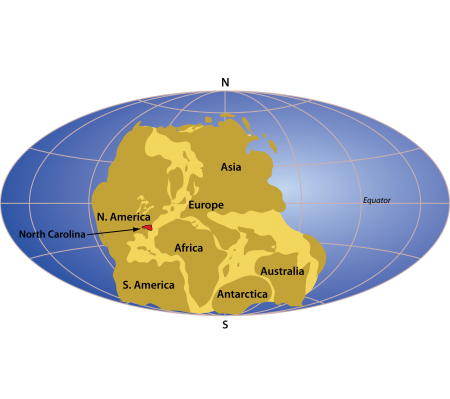 Figure 1: Sketch of the supercontinent Pangea. 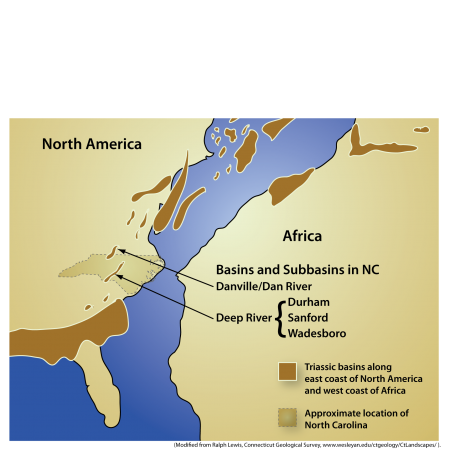 Figure 2: Sketch of rift basins along the Atlantic Ocean.

Land to either side of the rift basin began to erode rapidly filling the fault bounded lowlands with boulders, cobbles, sand, silt and clay.  The deposits later turned into the red to maroon colored conglomerates, sandstones, siltstones and mudstones common in the basin (Figures 3 and 4). Excellent examples of these deposits are exposed in the railroad cut. 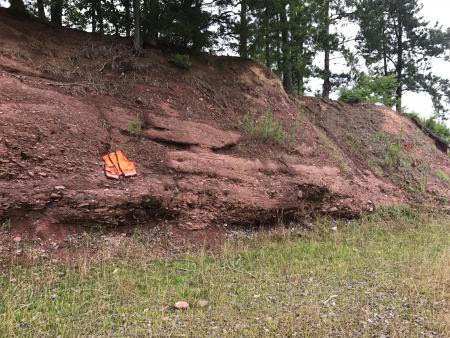 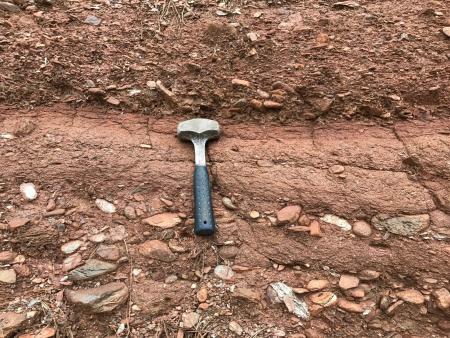 The Morrisville area during the late Triassic was full of life.  North Carolina was located near the equator and had a semi-arid tropical climate. Situated between rugged mountains, the ancient area was dominated by lakes, swamps and meandering rivers and streams that would periodically dry-up.  Crocodile-like animals called phytosaurs, early dinosaur ancestors, and primitive mammals roamed the land of the Triassic basin; fish, clams and various crustaceans lived in the lakes and rivers; insects crawled on the ground and flew through the air; and abundant conifer trees and cycads grew.  Evidence of this abundant life is seen by the common occurrence of petrified wood in Triassic sediments, the occasional discovery of fossilized bones of reptiles and the footprints of early dinosaurs (Figure 5) in Triassic basin sediments throughout North Carolina. 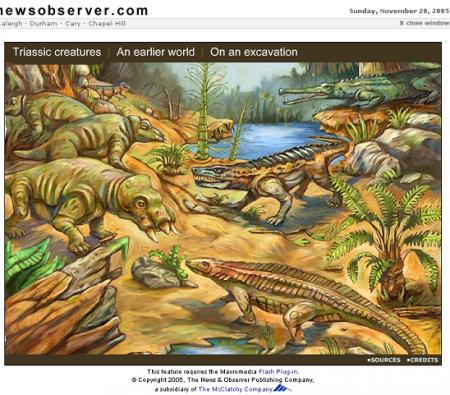 Figure 5: Artist's rendition of flora and fauna of the Triassic basins – From News and Observer.
Posted by Unknown at 1:17 PM