Introduction
The primary attractions for most visitors to Robertson Millpond Preserve are historical or ecological in nature (see the website and brochure).  However, the site has an interesting geological story to tell as well.  In this part of Wake County, Buffalo Creek runs in a south-southeast direction, parallel to and a few hundred feet east of a large diabase dike.  It is likely that the course of Buffalo Creek was somehow determined by the location of the dike.

Local geology
This portion of Wake County is almost entirely underlain by granite of the Rolesville batholith.  Not far from Robertson Millpond, good exposures of the granite can be seen.  An example is Temple Flat Rock, just three miles northwest, off Watkins Road.  The granite is an igneous rock that is around 300 million years old.  However, as seen on a geological map, the granite is transected by thin bodies (dikes) of a younger igneous rock type.

Diabase dikes
A dike is a sheet-like body of igneous rock intruded as molten magma that cuts across the older rocks.  In Wake County and surrounding areas, most diabase dikes are sheets that dip very steeply and trend close to north-south (Figure 1).  Diabase is a dark-colored igneous rock that is a variety of basalt, the rock type that makes up all the ocean floors of the earth.  Whereas basalt is volcanic, diabase is intrusive, meaning that the molten magma cooled below the earth's surface.  The age of the diabase in our region has been determined quite precisely; it is almost exactly 200 Ma (million years old).  In fact, our diabase was formed in response to the stretching and eventual breakup of the supercontinent Pangea, and the opening of the Atlantic Ocean. 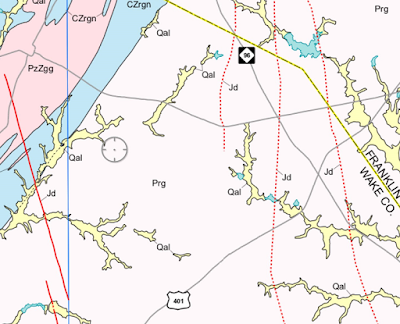 
Diabase magnetism
Geologists can often take advantage of a rock’s physical properties to determine its presence, even when it is not exposed at the earth’s surface.  Diabase is magnetic enough to stand out, especially when it is located among rocks that have low and consistent magnetism.  This is the exact situation when diabase dikes were intruded into granite, which is a “magnetically flat” rock.  After aerial magnetic surveys were conducted, a strong linear magnetic anomaly was seen along Buffalo Creek, and for that reason, a diabase dike running about north-south had been inferred in the Robertson Pond area (Figure 2). 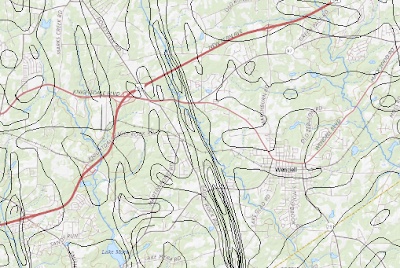 Figure 2.  Aeromagnetic map of the vicinity of Buffalo Creek and Robertson Millpond.  Note the strong anomaly running along the creek; if this were a topographic map, it would be a sharp ridge.


In the woods along the west side of Robertson Millpond, abundant large boulders of diabase define the trace of the dike (Figures 3 and 4).  The best spot to see the diabase is near the northwest corner of the pond, and the best way to get there is by kayak or canoe.  Boulders may be seen near paddling trail markers 14-16.
The trace of the dike along the ground appears to be offset to the west relative to the magnetic maximum.  Most likely, this is mainly because the dike is a slab that is tilted (dips) steeply toward the east. 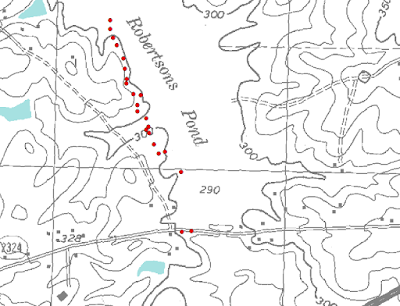 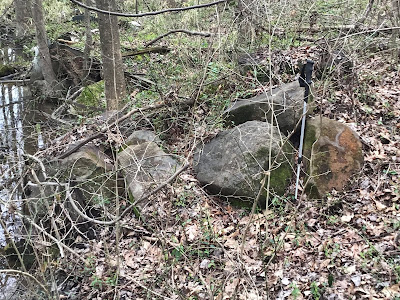 Figure 4.  Example of diabase boulders at edge of Robertson Millpond.
Posted by Skip Stoddard at 9:26 AM