Introduction
The Crabtree terrane contains a wide variety of metamorphosed igneous and sedimentary rocks, of which the graphite schist is undoubtedly the most distinctive.  Although it occurs only in Wake County, the graphite schist runs in several narrow bands that may be traced from south of Lake Wheeler north to Falls Lake.  This very soft rock is sooty black and easily marks paper (and skin).  Graphite is a mineral form of carbon (diamond is the other!) that occurs in metamorphic rocks.  Graphite may be mined for use as a lubricant, for batteries, heat-resistant containers, and for pencil “lead.”  In Wake County, several historic mines produced graphite from the mid-19th century to the early 20th century.  Lead Mine Road is named for an old graphite mine, but there is no real lead (Pb), just graphite (C).  Today, most graphite used in manufacturing must be very pure, and much of it is synthetic.  Graphite also is an excellent conductor of electricity.

Raleigh graphite schist
In addition to graphite, the schist contains muscovite mica, garnet, a small amount of quartz and feldspar, and commonly one the metamorphic minerals staurolite and/or kyanite.  The percentage of graphite may vary greatly (perhaps 5-50%) but is very high compared with schist from elsewhere.  If you crush some of the schist, you should be able to find a few of these other minerals, which are much harder than the graphite.
At this site, the large exposure of graphite schist is the result of stream erosion along the outside of a bend, creating a cut bank (Figure 1). 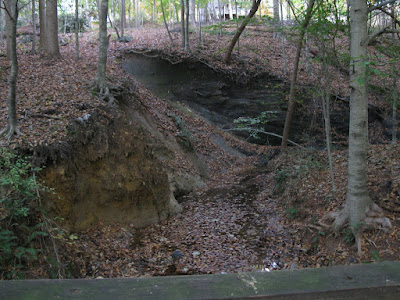 Around west Raleigh, construction activities frequently reveal the presence of graphite schist beneath the soil.  If you happen to see very dark gray to black material in a fresh excavation, it very well could be this rock.  An example is shown in Figure 2, which is a photo taken in the 1980s at the site of the A. E. Finley YMCA on Baileywick Road in north Raleigh. 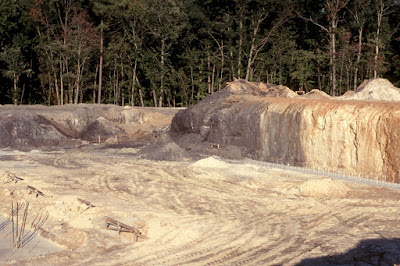 Significance of the graphite schist
Graphite is a form of carbon, and analysis of the Raleigh graphite shows that the carbon is most likely to be of organic origin.  The age of the graphite schist is not certain but based on its geological relationships with other rock units whose ages are known, it must be older than 500 Ma (million years).  This age is well before the age of woody plants and coal deposits, which are younger than 400 Ma.  The most likely organic source for the Raleigh graphite then is algae.  The high concentration of carbon, and the fact that the graphite schist is interlayered with metamorphic rocks that likely originated as sand and clay, suggests an ancient shallow-water algal mat environment.  Such environments exist today along the coast of Western Australia.