Site Access:  Park in the lot for fishing access on the west side of Six Forks Road, just south of the Upper Barton Creek arm of Falls Lake, and south of the boat ramp (Figure 1).  Follow the trail west across a tiny creek and then head to the left onto a low ridge. 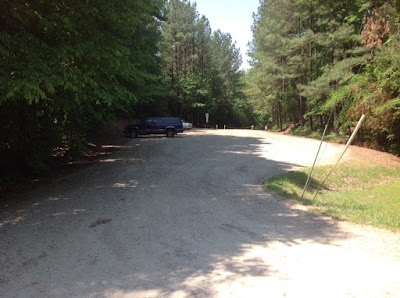 Introduction
Although it is not an extensive rock unit, the Falls Lake terrane (formerly known as the Falls Lake mélange) is very distinctive.  Bounded on the west by the Carolina terrane and on the east by the Crabtree terrane, it pinches out south of Falls Lake and continues to the north into Granville County.  The terrane consists mainly of mica schist within which there are scattered hundreds of blocks and pods of other rock types.  These rocks include soapstone, serpentinite, chlorite schist, and amphibolite, and a variety of characteristic minerals including talc, chlorite, actinolite, hornblende, serpentine, magnetite, chromite, and Cr-rich corundum (ruby).  Before metamorphism and deformation, the blocks were ultramafic igneous rocks, mainly peridotite, with lesser amounts of the mafic igneous rocks gabbro and basalt.  Blocks and pods that have been studied in the Falls Lake terrane range from fist-sized to more than a kilometer in length (Figure 2). 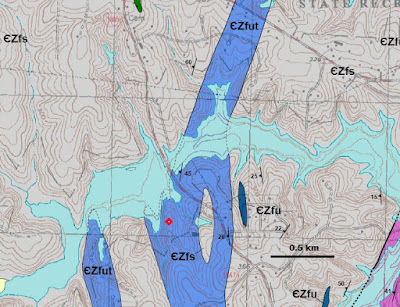 Figure 2.  Portion of geological map of the Bayleaf Quadrangle, showing location of this site (red diamond).  Falls Lake schist is in gray; ultramafic pods in blue.

On the ridge, you will encounter a large outcrop of massive, light green to dark green ultramafic rock (Figure 3).  This very hard rock consists of a dense aggregate of very fine-grained actinolite and/or serpentine.  If you look closely, you will see small metallic grains of magnetite, which will attract a sensitive magnet.  You will also see veinlets of tiny quartz crystals.  These were introduced very recently into the rock (geologically speaking); they have nothing to do with the rock’s origin and early history. 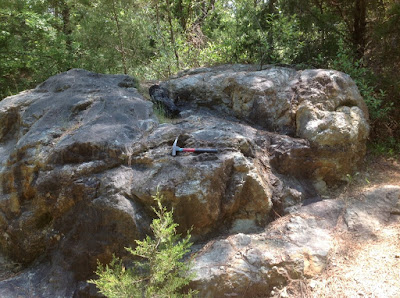 If you explore this ridge, walking uphill toward the south, and downhill toward the west, you should be able to find examples of talc (slippery to the touch and softer than a fingernail), chlorite (green and platy, will peel into flakes), hornblende (jet-black and lustrous), and perhaps crystals of actinolite (dark green, lustrous, and breaks into long fragments with smooth crystal faces).  In this part of Falls Lake, the lakeshore has numerous exposures of similar ultramafic rocks.  To see more, you can follow one of these on-line Falls Lake geology guides.  One guide is for a trip by boat; the other is along a hiking trail.

Significance of the Falls Lake terrane
There have been several different interpretations for the rocks of the Falls Lake terrane; each proposes a different mechanism to achieve the “block-in-matrix” nature of the unit.  The earliest studies interpreted the ultramafic rocks as intrusions into the schist.  In this scenario, extremely hot ultramafic magma was injected into the host “country rock.”  The magma cooled, and much later both rock types were metamorphosed.  In this case, we would expect to see cross-cutting contacts between the ultramafic rocks and the schist, as well as evidence of heating of the schist where it was in contact with the hot magma.  (We don’t see either.)
In the early 1980s, these rocks were inferred to represent a characteristic assemblage of rocks that forms at the site of an ocean trench above a subduction zone, where an oceanic plate descends beneath another plate.  Such assemblages are called accretionary wedges, or mélanges.  They consist mostly of sediment that may be scraped off the down-going plate or derived from erosion of the upper plate.  In the subduction process, pieces of lower crustal and upper mantle material (ultramafic and mafic rock) may be broken off and incorporated in the sediment, producing a chaotic mixture (mélange in French).  In this scenario, the precursor of the schist would be sedimentary rocks such as siltstone, mudstone, and sandstone.  We might expect to be able to trace out specific layers of the original sedimentary rock within the schist.  (We can’t).  Because feldspar weathers quickly in the sedimentary environment, we would not expect to find much in the schist.  (In fact, the schist is unusually rich in feldspar.)  We would also expect that individual grains of highly resistant minerals like zircon would be rounded from sedimentary transport.  (They aren’t.  Instead they are well-formed crystals like those that crystallize in igneous rocks, directly from a magma).
Tracing the Falls Lake terrane north into Granville County, the metamorphic intensity decreases.  Whereas the Wake County area was subjected to a medium to high grade of metamorphism, the Granville rocks only experienced low-grade metamorphism.  We therefore gain a more confident understanding of the original rocks because they have not been modified so much.  In fact, it seems the precursor of the Falls Lake schist was itself an igneous rock related to granite – the Gibbs Creek metagranodiorite.  The Falls Lake schist represents a large igneous pluton that is related to the volcanic rocks of the Carolina terrane.  It may represent the roots of the ancient volcanic arc.  The ultramafic and mafic blocks and pods are pieces of wall rock that were incorporated into the magma as it rose (xenoliths).  In this scenario, the evidence that counters the first two theories makes perfect sense.  Further testing of the third theory is underway.


The evolving theory of the Falls Lake mélange/Falls Lake terrane is a very good case study of how science works, by suggesting hypotheses and then testing them.