Raleigh terrane and Raleigh gneiss
The Raleigh terrane is situated between the granitic Rolesville batholith, to the east, and the Crabtree terrane to the west.  The Raleigh gneiss is the dominant unit within the terrane.  The gneiss represents the highest metamorphic grade within the county, and thus its rocks were buried more deeply than the other metamorphic rocks, reaching higher temperatures and pressures.  The gneiss is characterized by alternating layers of darker and lighter color, reflecting the differing mineral content of the layers.  Dark layers contain biotite (black mica) with or without hornblende (black amphibole).  The light layers contain mostly quartz, feldspar, and sometimes muscovite (white mica).  The grain size varies from fine to coarse.  In addition to hornblende gneiss, biotite gneiss, and amphibolite (hornblende-feldspar rock), the Raleigh gneiss includes considerable weakly layered light-colored granitic gneiss.  The precursor of the gneiss was most likely plutonic igneous rocks.  That is, bodies of igneous rock that crystallized from magma well below the earth’s surface.  These bodies probably were of varied composition, ranging from granite (felsic) to diorite (intermediate) to gabbro (mafic).  These plutons are believed to represent the roots of the ancient volcanic arc from which the Carolina terrane originated.  Their age is not well known, but they are most likely to be between 625 and 550 Ma (million years old).  Around 550 Ma, well before these rocks were metamorphosed, they were intruded by an unusual granitic pluton, now represented by the Falls leucogneiss.  Nearly all exposures of Raleigh gneiss also include some younger (about 300 Ma) granite or pegmatite (a very coarse variety of granite) related to the Rolesville batholith.

Rocks at Fallon Park
Begin at the upper end of the park and follow the trail downstream.  There are several very good exposures of rock in the creek bed.  One of the first things to notice is the foliation or layering of the rock.  The foliation reflects layers of gneiss with different mineral content that have slightly differing resistance to erosion; layers that are more easily eroded are indented.  Also notice that the foliation is roughly parallel to the stream (Figure 1).  This is not a coincidence; the structure of bedrock commonly exerts an influence on the course of rivers and streams. 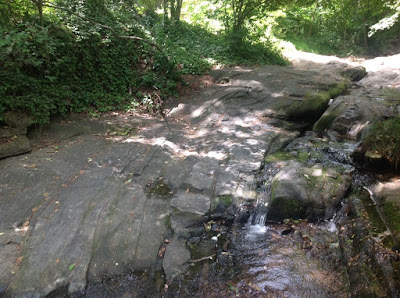 Figure 1.  Creek-bed outcrop of Raleigh gneiss near the upper end of Fallon Park.  Note that the stream follows the foliation (gneissic layering) in the gneiss.

As you walk downstream, you will see more outcrops.  Eventually you will come to a footbridge near the brick remains of an old structure, likely a small mill.  Here you can clearly see that the foliation, which runs about north-south, is also inclined quite steeply, perhaps 70 degrees.  Strike is the geological term used to refer to the direction of the trend of layers; dip refers to the inclination of the layers, downward from horizontal.
You will also encounter cross-cutting dikes of pegmatite (Figure 2).  Pegmatite is a coarse-grained variety of granite.  This pegmatite is likely related to the nearby Rolesville batholith.  It consists of feldspar, quartz and muscovite (white mica).  Note how the pegmatite dike cuts across the layering of the gneiss.  This is a very important basic geological observation that indicates the pegmatite is younger than the gneiss.  From such observations, complex geological histories are pieced together. 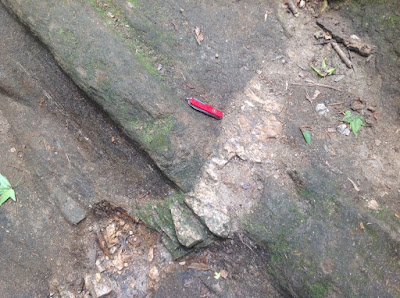